Who did they belong to?

It is thought that they may have belonged to Alfred John Monson who was charged with the murder of Cecil Hambrough in 1893.

Why were these socks kept?

The socks were possibly used as evidence in a murder trial. A letter, written by W.H. Parsons in 1900, claims they are the very pair worn by Monson “that fateful day” although we only have his word that the socks are the ones that were used.

What is the story behind these socks?

In 1893, 20 year old aristocrat Windsor Dudley Cecil Hambrough was killed whilst out shooting rabbits with his 34 year old tutor, Alfred John Monson and another man, Edward Scott, on the Ardlamont estate in Scotland. Scott disappeared without trace and Monson claimed that Hambrough had accidentally shot himself whilst climbing over a fence or wall. However, suspicious happenings in the days before Hambrough’s death (including Hambrough taking out two life insurance policies in the name of Mrs Monson and nearly drowning whilst out on a fishing trip with his tutor) soon led to Monson being arrested and charged with Hambrough’s murder. The murder trial began in Edinburgh on 12th December 1893 and Monson pleaded ‘not guilty’. After hearing from 100 witnesses, a verdict of ‘not proven’ was declared and Monson walked free, but the public thought that Monson was guilty.

Click here to find out more about the story linked to these socks.

Help Steve the student graduate from University by correctly answering these multiple choice questions about the story behind the socks! 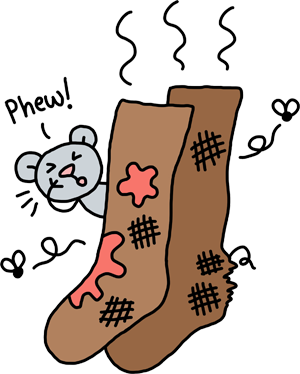 A short audio clip by a local student about the murderer’s socks. 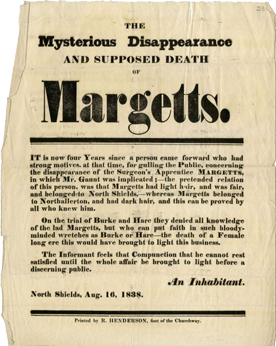 More about the Murderer’s Socks…

If you liked the story behind the socks, you may also like The Mystery of Margetts.

John Margetts, a surgeon’s apprentice from North Shields went missing in 1827 after being sent with some medicine for John Gaunt’s wife. Posters from the time accused John Gaunt of being involved.

Among the different theories was that Margetts had left the country to enter the service of the East India Company. A more sinister theory was that he was the victim of murderers Burke and Hare who were hanged in 1829 for murdering 16 people in Edinburgh and selling their corpses to DR Robert Knox to be dissected in his anatomy lectures.

40 years after the trial, in 1933, a senior (someone with a lot of importance) firearms officer from Scotland Yard read the details from the trial and wrote that the evidence is 100% for conviction.