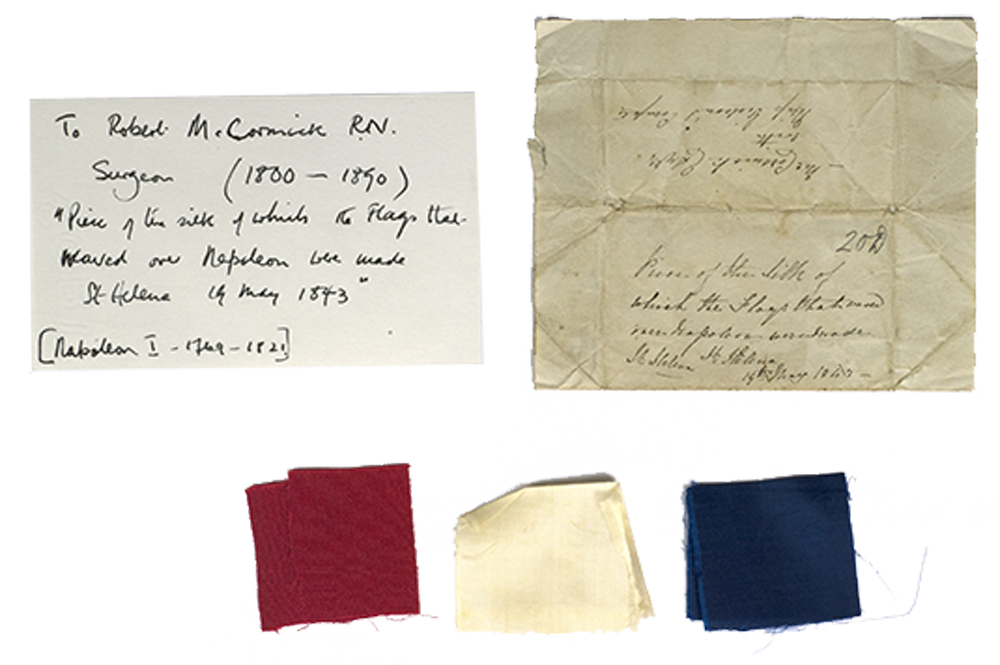 These square of material are thought to be pieces of Napoleon Bonaparte’s flag, from when he was exiled (removed from a country typically for political reasons) to the isolated island of St. Helena which is in the Mid-Atlantic Ocean. It contains pieces of red, white and blue silk with an accompanying scrap of paper that reads â€œPieces of the silk of which the flag that waved over Napoleon were made. St. Helena 19 May 1843. The red, white and blue colours are still the colours of the French flag today.

Who was Napoleon Bonaparte?

Napoleon Bonaparte (also known as Napoleon I) was a French military leader and emperor who took control of much of Europe during the early 19th Century (1800s).

What was Napoleon known for?

He was known to be shrewd (someone who shows good powers of judgement) and ambitious and a skilled military strategist (someone who is skilled at planning in war politics). He successfully waged war against various armies of Europeon nations and expanded his empire. However, after a disastrous French invasion of Russia in 1812, he abdicated (gave up) the throne in 1814 and was exiled to the Mediterranean island of Elba in Italy. In 1815, he returned to power in his Hundred Days campaign. Napoleon’s Hundred Days campaign is known as his last period of rule and it took place between 20th March 1815 – 8th July 1815. This is where he and his army took control of Paris for 100 days after King Louis XIII (King Louis 13th) fled. The rest of Europe did not want Napoleon to return to rule and gathered their armies together to defeat him at the Battle of Waterloo (18th Jun 1815). This marked the final defeat of Napoleon and he was exiled to the island of St. Helena in the Mid-Atlantic Ocean.

Why were these small pieces of red, white and blue silk kept?

These pieces of silk form part of a collection built up by the historian and collector Edwin Clarke (1919-1996). Pieces of the Tricolore (French flag) from this time would have been a prized item for collectors as Napoleon has the reputation of being one of the greatest military leaders in History.

Help Steve the student graduate from University by correctly answering these multiple choice questions about the Napoleon Flag. 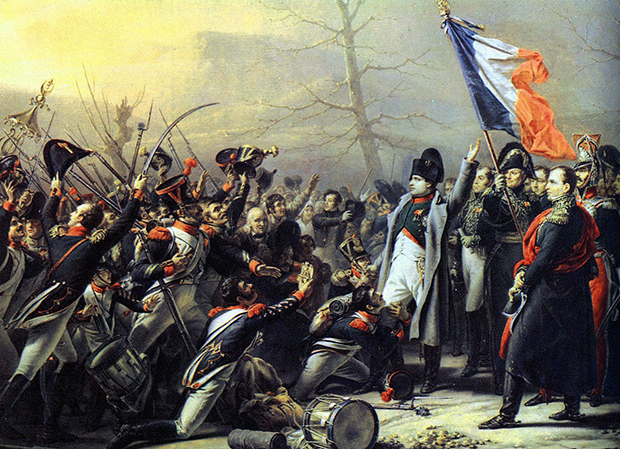 Click here to find out more about Napoleon in exile.

Click here to view a watercolour painting of Napoleon on board the ship HMS Northumberland taking him to the island of St. Helena, in 1815 following his second abdication.

Click here to view a plan of the Battle of Krasnoi, which was fought during Napoleon’s campaign in Russia in 1812.

Napoleon is famous for his supposedly short height. However, he was just under 1.70 metres tall, which was an average height for a man during those times.